Thought you all might find this interesting and unsurprising. Here’s a screenshot of the exchange I had with mods on Kavanaugh’s page trying to get some of the evidence that calls the sexual assault allegation into question posted.

What’s even more interesting is that I posted this to r/The_Donald subreddit and it was immediately shadow banned.  It was also down-voted into oblivion on r/Libertarian.   Commies infiltrating the mods?

HEY!! Good thing I got a screen shot of the page before they cut my comment out. By the way, I’m not evading a block. This is all made up justifications to prevent the information from being published.  Everything that’s struck is what I wrote. 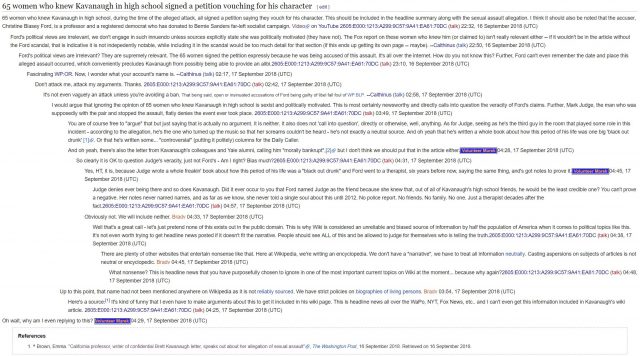 65 women who knew Kavanaugh in high school, during the time of the alleged attack, all signed a petition saying they vouch for his character. This should be included in the headline summary along with the sexual assault allegation. I think it should also be noted that the accuser, Christine Blasey Ford, is a professor and a registered democrat who has donated to Bernie Sanders far-left socialist campaign. Video on YouTube2605:E000:1213:A299:9C57:9A41:EA61:70DC (talk) 22:32, 16 September 2018 (UTC)

Ford’s political views are irrelevant, we don’t engage in such innuendo unless sources explicitly state she was politically motivated (they have not). The Fox report on these women who knew him (or claimed to) isn’t really relevant either — if it wouldn’t be in the article without the Ford scandal, that is indicative it is not indepedently notable, while including it in the scandal would be too much detail for that section (if this ends up getting its own page — maybe). —Calthinus (talk) 22:50, 16 September 2018 (UTC)

::Ford’s political views are irrelevant? They are supremely relevant. The 65 women signed the petition expressly because he was being accused of this assault. It’s all over the internet. How do you not know this? Further, Ford can’t even remember the date and place this alleged assault occurred, which conveniently precludes Kavanaugh from possibly being able to provide an alibi.2605:E000:1213:A299:9C57:9A41:EA61:70DC (talk) 23:10, 16 September 2018 (UTC)

It’s not even vaguely an attack unless you’re avoiding a ban. That being said, open or insinuated accusations of Ford being guilty of libel fall foul of WP:BLP. —Calthinus (talk) 02:58, 17 September 2018 (UTC)

::::::I would argue that ignoring the opinion of 65 women who knew Kavanaugh in high school is sexist and politically motivated. This is most certainly newsworthy and directly calls into question the veracity of Ford’s claims. Further, Mark Judge, the man who was supposedly with the pair and stopped the assault, flatly denies the event ever took place. 2605:E000:1213:A299:9C57:9A41:EA61:70DC (talk) 03:49, 17 September 2018 (UTC)

You are of course free to “argue” that but just saying that is actually no argument. It is neither. It also does not ‘call into question’, directly or otherwise, well, anything. As for Judge, seeing as he’s the third guy in the room that played some role in this incident – according to the allegation, he’s the one who turned up the music so that her screams couldn’t be heard – he’s not exactly a neutral source. And oh yeah that he’s written a whole book about how this period of his life was one big ‘black out drunk’ [1]. Or that he’s written some… “controversial” (putting it politely) columns for the Daily Caller.
And oh yeah, there’s also the letter from Kavanaugh’s colleagues and Yale alumni, calling him “morally bankrupt”,[2]but I don’t think we should put that in the article either. Volunteer Marek 04:28, 17 September 2018 (UTC)

Yes, HT, it is, because Judge wrote a whole freakin’ book about how this period of his life was a “black out drunk” and Ford went to a therapist, six years before now, saying the same thing, and’s got notes to prove it. Volunteer Marek 04:45, 17 September 2018 (UTC)

:::::::::::Well that’s a great call – let’s just pretend none of this exists out in the public domain. This is why Wiki is considered an unreliable and biased source of information by half the population of America when it comes to political topics like this. It’s not even worth trying to get headline news posted if it doesn’t fit the narrative. People should see ALL of this and be allowed to judge for themselves who is telling the truth.2605:E000:1213:A299:9C57:9A41:EA61:70DC (talk) 04:38, 17 September 2018 (UTC)

There are plenty of other websites that entertain nonsense like that. Here at Wikipedia, we’re writing an encyclopedia. We don’t have a “narrative”, we have to treat all information neutrally. Casting aspersions on subjects of articles is not neutral or encyclopedic. Bradv 04:45, 17 September 2018 (UTC)

Up to this point, that name had not been mentioned anywhere on Wikipedia as it is not reliably sourced. We have strict policies on biographies of living persons. Bradv 03:54, 17 September 2018 (UTC)