This is not click bait.  I’m not making this up.  The UK police are literally filmed escorting a large band of violent Muslims, all chanting Allahu Akbar while wearing balaclavas, on their way to attack a political rally full of women and children.  The Muslims hurled bricks, rocks, eggs, anything they could get their hands on, at women and children, and then destroyed several of the police cars who escorted them to the rally.  The UK press then reported that the Tommy Robinson supporters were largely responsible for the violence.

I just want you to be aware how far gone the UK is.  It is an Islamic Caliphate.  The UK is not a western European state any longer.  The UK state has been completely and utterly absorbed into an Islamo-fascist regime.

Here’s what happens when you run for an MEP office on a platform of limited immigration in the UK and try to hold a rally. Perhaps you can notice one of the terrorists getting ready to lob a brick in the background.  Perhaps you notice the police not doing anything to stop or arrest them. 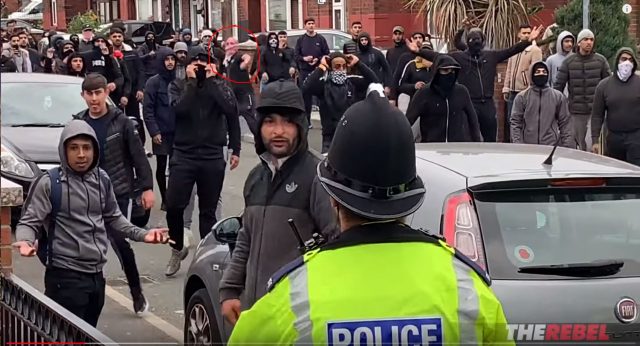 Here’s some of the crowd that was getting pelted.  Looks like there are a lot of women and children present: 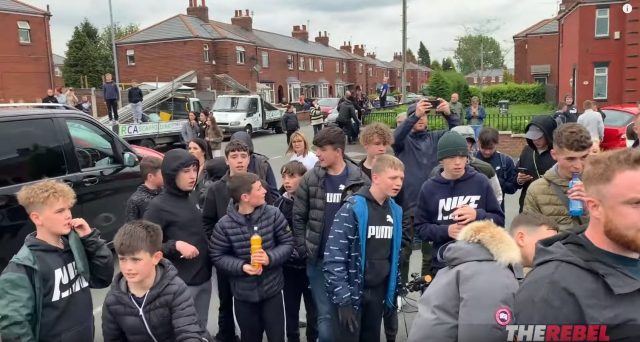 Tommy responds to the incident in this video:

Here’s how the town’s MP responded to this incident:

Jim McMahon, Labour MP for Oldham West and Royton, tweeted about seeing the town used for ‘hate and division’.

The shadow local government minister wrote: ‘It’s horrible to see our town being used for hate and division when our own future is a shared one, long after the circus has left town.

‘Very different from our own stall in Oldham earlier today where we celebrated our town.’

Alongside the words, he posted a video, adding: ‘We don’t need people, coming to our town, trying to divide us for their own political agenda.

You see, it’s the fault of people who support Tommy Robinson that they were pelted with rocks and bricks.  If they weren’t so racist and supported completely open borders and importing the entire third world into the UK, this never would have happened.  Perhaps that’s why the police chose to do nothing and let the brick throwing go unanswered.

For a comparison, here’s how a subject is treated when he tries to walk down the streets of London and avoid having his picture taken by the Orwellian security cameras.  In the UK, it’s OK to put on a ski mask and throw bricks at women and children, as long as they are attending a Tommy Robinson rally; but if you try to cover your face while walking down a London street, you’ll get interrogated and fined by the cops for disorderly behavior.

The UK media plays a large part in creating this madness, as they wantonly lie about Robinson at every opportunity.  To get a better understanding of how the state run media in the UK slanders those who oppose the state’s narrative, be sure to watch the Panodrama documentary.  It will seriously make your jaw drop.  If you thought CNN was bad with fake news, you will not believe the kind of editorial stunts the BBC engages in.

This week, Carl Benjamin was attacked four times by NPCs throwing milkshakes.  When confronted, these people reveal themselves to be so uninformed that they don’t even know what they are protesting over.  The UK press is literally encouraging these brainless twits to engage in acts of violent political intimidation by making a mockery of the attacks.

The entire country is a lost cause.  It is no longer a western European state.