I’m a vegan who’s diet consist of 90% potatoes.  When I post a potato recipe, it is the product of uncountable repetitions to perfection.  If you follow my advice to the letter, your mind will be blown.  This isn’t some baloney recipe I scraped from Allrecipes, this was arrived at through dedication to research and countless tests.  Imagine if you made 2 potato dishes from scratch everyday for your own personal consumption.  That’s the level we are talking about here.

1. Get a large pot of water, capable of fully submerging all the potatoes, and bring it to a boil on the stove.

3. While the water is coming to a boil, turn the oven on to 425 F with the half sheet in it, convection turned on.

4. Take a vegetable peeler and peel a stripe around each potato along the widest edge.  Then slice the potato in a half with a knife down the middle of the unpeeled portion length wise.  If you have really long fingerlings, cut them into bite sized portions width wise as well.

5. Toss the cut pieces into the colander while you cut and prep the rest of the bag.

6. Rinse the cut pieces in cold water using the colander.

7. After the water comes to a boil, dump the potatoes into the water and set a timer for 6 minutes.

8. While the potatoes are boiling, peel garlic and finely slice it.

9. Add the sliced garlic, olive oil, rosemary and thyme to the small sauce pot and bring to medium heat until the aromatics are lightly browned – and by light, I mean barely a hint of brown. 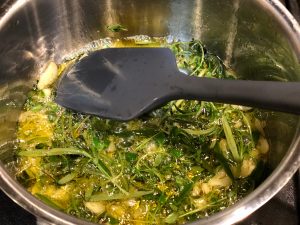 10. Strain the aromatic oil into a measuring cup and set aside. 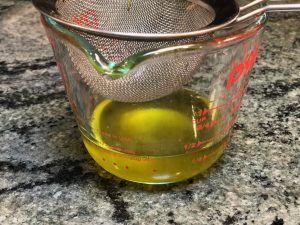 11. After the potatoes have boiled 6 minutes, strain them into the colander.

12. Toss the potatoes in the colander to rough them up a bit.  They should just start to get a starchy sticky coating covering them.  They will start to stick to the colander when they are close to being roughed up enough. 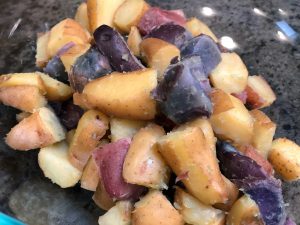 13. Dump the roughed up potatoes into the mixing bowl.  Add about half the oil to the bowl and firmly toss the potatoes with a spatula to get each of them completely covered in the aromatic oil.

14. Take the half sheet out of the oven and place each potato BY HAND with the cut side facing up onto the hot half sheet leaving plenty of space between each potato.  A half sheet will be more than large enough to accommodate 1.5 lbs of potatoes, but you might run out of room using a smaller 9×13 pan.  Spacing is important to maximize quality.  If you don’t give them enough space, you will not achieve perfection.  They will not bake evenly. 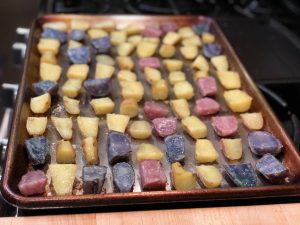 Potatoes laid out on half-sheet

16. Finely mince enough parsley to garnish the dish while waiting for potatoes to finish.

17. After the potatoes are done baking, dump them into the mixing bowl and drizzle enough of the remaining oil into the bowl to coat the potatoes.  You don’t need to drown them, but they do need to be coated.  Adding this reserved oil is crucial to bring out the maximum flavor.  Most of the flavor from the aromatic oil is lost during the baking process.

18. Add minced parsley and salt to taste; toss in oil.  You may need more salt than you think. 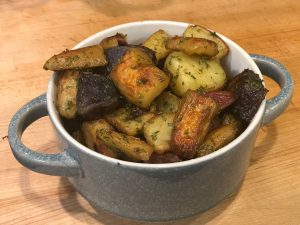 Baking times may vary depending on your oven.  If you don’t have a convection oven, go buy one.  You can try cooking them longer and flipping them halfway through, but for maximum crispiness and even cooking you really need a convection oven.

The end result are crispy potato halves that are the equivalent of being deep fried in terms of crispiness, but with mind blowing flavor from the aromatics and the parsley.

You can thank me later.