An unclassified document printed on FBI letterhead dated January 20, 2016, which contains the subject line “Supplemental Classification Review and Determination” was addressed to the Bureau of National Security’s Assistant Secretary Gregory B. Starr from Peter Strzok who is listed as “Section Chief” of the “Counterespionage Section” in reference to Strzok’s CIA post. Keep in mind, this is not an FBI post as Strzok’s position at the FBI is “Deputy Assistant Director Counterintelligence Division” not “Section Chief” which is a CIA post. 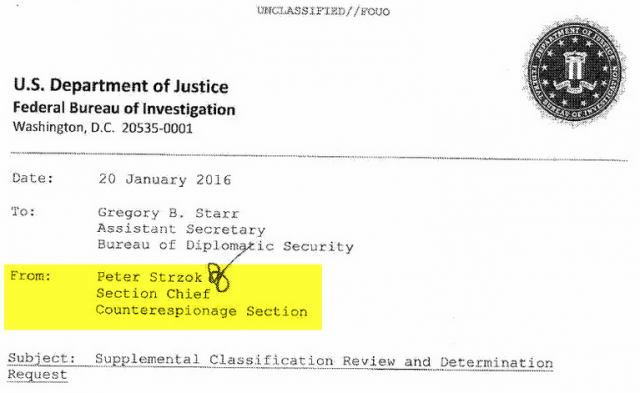 My friends that have worked in intel say the CIA is entirely run and staffed by communists.  In my opinion, the CIA and NSA need to be completely dismantled and destroyed.  The only foreign intelligence service that should be allowed to exist should be the Office of Naval Intelligence.  Full stop.

America has no need to have 20+ intelligence agencies, mostly civilian, running around engaging in industrial espionage, spying on the American people, trading secrets on foreign actors for information on our own citizens, monitoring all of our communications, perusing our bank accounts, scanning our social media, looking into every nook and cranny of our lives for no reason at all.

All foreign intelligence should be the domain of the military, with military controls in place, with NO ROOM to have deep state actors placed into positions of power within the intelligence community.

EXPOSED: Peter Strzok Grew Up In Iran, Worked As Obama and Brennan’s Envoy To Iranian Regime

Maybe I’ll Keep It Up