First a word from Dr. Sam Fink who is currently treating patients with COVID-19. 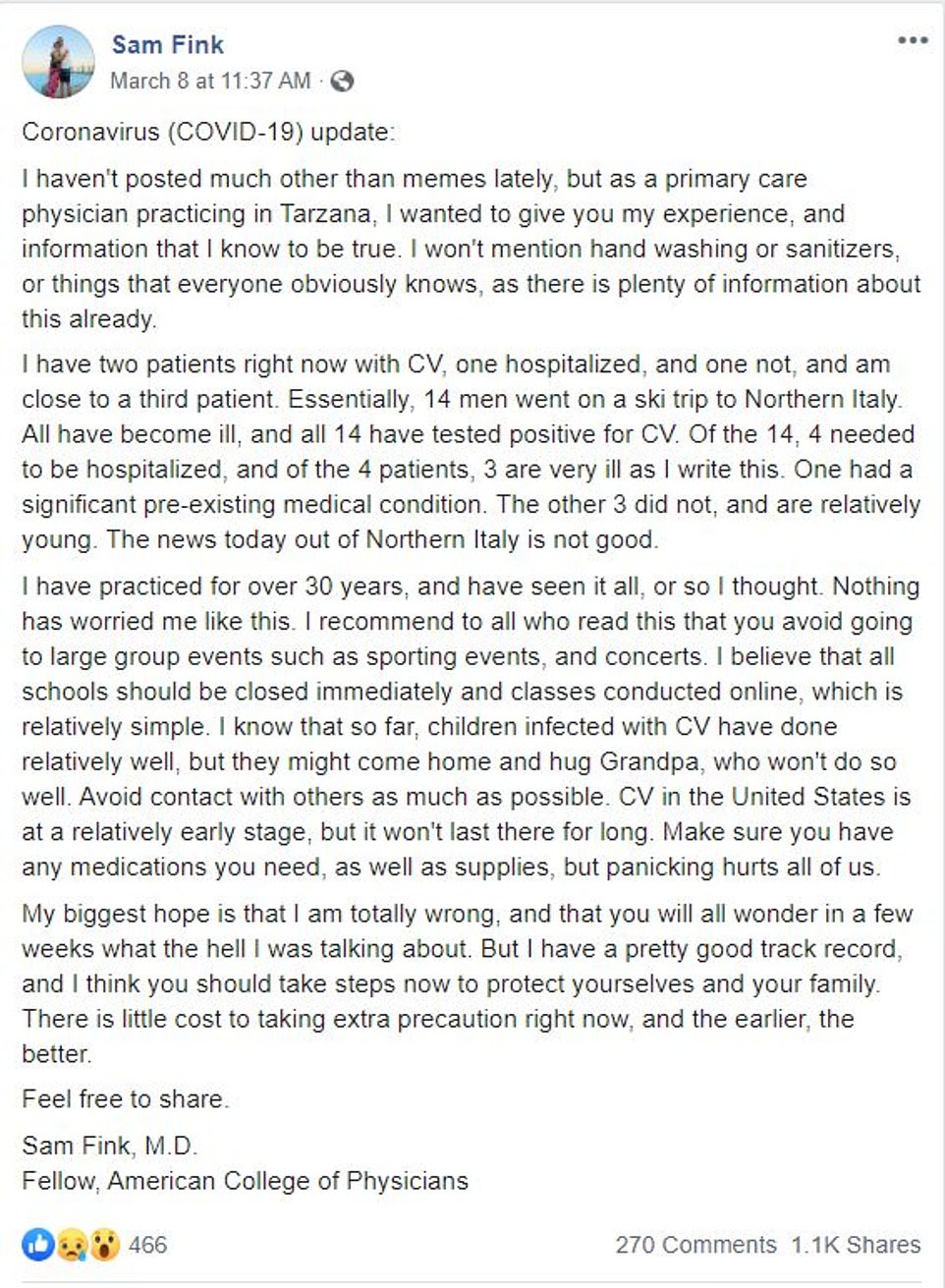 Chloroquine was developed decades ago as a treatment for malaria.  Chloroquine blocks viral RNA replication in cells by allowing huge amounts of zinc to pass through the cell wall.  Once the zinc enters the cell, it then acts to disrupt the viral RNA replication cycle.  It’s possible this regimen could lower mortality rates of COVID-19 by an order of magnitude. A study released on the 9th shows hydroxychloroquine to be more potent than chloroquine and the authors are recommending it for COVID-19 treatment.

Current statistics (3/9/20) regarding the odds of severity of infection indicate 80% of infected people will show mild symptoms (including 20% that will show no symptoms at all), 15% will show severe symptoms that may require medical support and 5% will be critical cases that require life sustaining medical support.  Current statistics from Italy indicate a 6% overall mortality rate, which shows us what this virus is capable of when a medical system becomes overwhelmed.

Given the highly infectious nature of the disease, it’s likely we could see upwards of 80% of the American population infected, meaning there could be upwards of 39 million hospitalizations and 13 million critical care cases in the US over the course of the pandemic.  If widespread infection were to occur rapidly, the medical system would be overwhelmed. Doctors are already being forced to chose who lives and dies in Italy due to overwhelmed intensive care units.

As of 3/2/20, the Chinese CDC is putting out mortality figures of 0% for those under ten years old, 0.2% to 0.4% between the ages of ten and 50, 1.3% in your 50s, 3.6% in your 60s, 8% in your 70s, and a 14.8% risk in your 80s. It’s unknown why children under ten are not at risk of dying from the disease (probably because it was engineered in a Chinese lab to kill the elderly to prevent American Socialist Security and Medicare from imploding the global economy, but that’s just my conspiracy addled brain talking).

There are approximately 50 million people over the age of 65 in the US.  If we averaged those death rates from the Chinese CDC and assumed an 80% infection rate with a 7% fatality rate, that would suggest 2.8 million deaths from those of retirement age alone.

Now those numbers could be inflated because China has explicitly stated that they are only testing the most severe cases.  The Italian death rate is almost certainly inflated due to under-testing of the population.  Further, the current test kits only have an 80% accuracy rate, so there are a lot of false negatives.  The only test that has been shown to have a high accuracy rate (97%) is a CT scan along with symptomatic diagnosis.  Obviously testing everyone with CT scanners is an impossibility.

On February 13th, UC San Diego Health put out a video arguing that actual average mortality rate from COVID-19 is probably closer to .3%, which is about 10 times more deadly than the flu.  The argument is that, if you were to count all the undocumented cases, it would lower the mortality ratio down to more realistic levels.  At .3%, the virus could potentially kill a million people in the US. Reports out of Wuhan at the peak of the pandemic were saying funeral homes were doing 5 times the normal business.

I think a good case study is to look at the infected cruise ship passengers of the Diamond Princess, which currently stands at 705 infections out of 3,711 on board with 6 deaths, leaving the fatality rate at .85% and an infection rate of 19%; this is closer to what UC San Diego was predicting, but also keep in mind that cruise ship passengers tend to be older and all of the victims in this case are over the age of 70.

As data comes in, we are seeing higher death rates for people with co-morbidities and compromised immune systems, such as the elderly.  It’s clearly far more deadly than the flu, about 10 to 20 times more deadly since the flu death rate is around .01% to .03%, but at least it’s not like SARS or MERS.

According to one Hong Kong medical official, current estimates say it has the potential to infect 60% of the global population if it remains uncontained and without a cure or vaccine.  I’ve also seen Harvard researchers saying 80%+ of people will become infected at some point in the future.  Given that we now know upwards of 20% of infected people will show no symptoms, the actual infection rate will probably be even higher.  Millions of people will be carriers of the disease while displaying no outward symptoms at all. They will never bother to self-isolate.  They will never bother to be tested.  They will simply think they are one of the lucky ones who escaped getting sick.

Hopefully quarantine and safety precautions will slow the spread down long enough for a vaccine to be developed.  It’s critical that the infection rate be slowed so that emergency services and wards are not overwhelmed with a mass of infections all at once. There are new technologies that might be able to get a working vaccine to the public rapidly.  One company, MIGAL, is reporting they could have an effective vaccine developed in as little as a few weeks.

JAMA put out an article (2/27) reporting that 4 people in China who were previously hospitalized for COVID-19 pneumonia, who then apparently fully recovered and showed no further symptoms of the virus and were discharged to home quarantine, continued to test positive for the virus 13 days after discharge.  While they didn’t infect any family members during their quarantine, this news obviously complicates tracking the spread of the virus.

I’ve also seen recent reports of people who have recovered, tested negative after recovery, then coming back a month later with symptoms and tested positive again.  This also further complicates tracking the spread of this virus.  It’s possible some people could hold this virus dormant for long periods of time without symptoms, yet still be spreaders of the disease.

The virus kills by inducing a cytokine storm focused on lung tissues.  A cytokine storm can occur when the immune system realizes what an infected cell looks like.  The immune system suddenly goes on a rampage destroying infected cells in an over-zealous manner.  This can be very damaging to the body if it happens too rapidly.  This intense reaction by the immune system ends up destroying lung tissue and causing a viral pneumonia to set in.  The destruction of lung tissue results in a compromised lining of the lungs that can then lead to a bacterial pneumonia complication on top of the viral pneumonia.  So basically it kills you by drowning you in your own bodily fluids.

Nicotine is known to mitigate some of the effects of a cytokine storm by down-regulating the immune response.  So perhaps stocking up on Nicorette gum and popping some the minute you feel sick might not be a bad idea.  Of course, this could lead to further issues given the toxicity and addictive nature of nicotine.  As a side note, the current fatality profile indicates smokers and former smokers are at a higher risk of dying due to the lung damage the virus induces, so don’t use this as an excuse to start smoking again.

With the current assumed death rate and a 80% infection rate, that means we’ll probably see between 1 and 3 million people die in the US (about 1 in 300 to 1 in 100).  Given what we’ve seen in Wuhan, it’s probably a good idea to stock up on N95 masks, bulk dry foods, paper towel, toilet paper and detergents. If you can get your hands on an oxygen concentrator, I’d grab one of those as well, because the hospitals will likely be too overwhelmed to give you oxygen should you develop pneumonia.

On 2/18/20 the WHO put out a report saying the virus has a 2% death rate and a 5% severe case rate, which is more in line with my initial predictions, but I think this data is also suffering from the under-reporting of cases.   Dr. John Campbell is putting out daily videos on this subject that are worth watching.  He cuts through a lot of the BS and sticks to documented facts.  He also get’s a lot of anecdotal data from his colleagues overseas that others don’t have access to.

His assessments agree with mine, in that we are probably looking at a 1 to 0.5% fatality rate, focused heavily on the elderly and people with co-morbidities, such as: